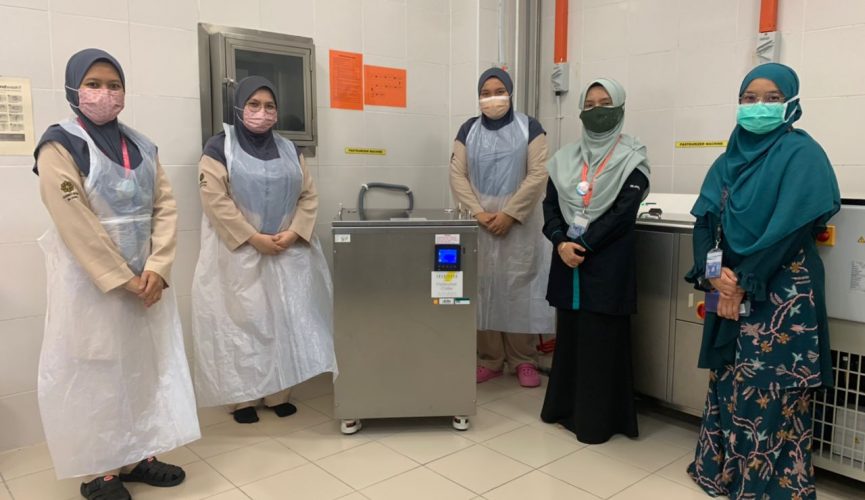 On 26th July 2022, the first Shariah-compliant milk bank in Malaysia, Halimatussaadia Mother’s Milk Centre (HMMC) was launched by Her Majesty Queen of Malaysia at Sultan Ahmad Shah Medical Centre, International Islamic University Malaysia (SASMEC@IIUM) in Kuantan, State of Pahang. HMMC mark as a major breakthrough as the establishment of milk bank has been controversial within the Muslim Countries including Malaysia.

The idea of establishment the human milk centre in Sultan Ahmad Shah Medical Centre (SASMEC) @IIUM started towards the end of 2019 as part of SASMEC @ IIUM’s Baby-friendly Hospital Initiatives (BFHI) Flagship – now known as Sejahtera Family Flagship. Halimatussaadia Mother’s Milk Centre (HMMC) team in SASMEC @IIUM aspires to establish an approved Sharia-compliant human milk centre to ensure all babies are provided with mother’s breastmilk, where possible. To achieve this, HMMC team strived to develop a comprehensive standard operating procedure (SOP) that complies with Islamic guidelines in preserving not only life but also lineage, property and intellect.

Throughout the long journey in establishing HMMC, the task force had undergone multiple dialogs and discussions with the various Islam Religions authority in the State of Pahang. A study visit to the Donor Milk Bank in Queen Elizabeth University Hospital Glasgow had also taken place in February 2020. This visit provided a good insight to the core team of HMMC with regards to the technicalities in establishing a human milk bank as well as the issues related to its maintenance.

HMMC received its first donor in August 2021. HMMC will create more opportunities and improvement in the field of infant feeding and neonatal care not only in Malaysia but also to the global Muslim community.

Medicare Colgate Limited and HNS Bestari Sdn Bhd are truly grateful and appreciate the trust and confidence of HMMC in SteriFeed as their pasteuriser in processing the donor milk.